We had a final farewell, going away pizza party Friday night with our Kanti Awa friends.  We are really going to miss this group of people who have taken us in.  They are the first Bonairians we started hanging out with, and they made us feel welcome. We were introduced in September and have been meeting up with them almost weekly ever since.  Marilee and Noel have the Antillean Wine Tastings every second Saturday of every month at their shop, Le Garage.  It is a fun way to taste different wines and meet new people! What a fantastic place to pick up kitchen necessities (It is like a mini IKEA!)

Margot and Matthew, Anske, Artie, Evie and Larry, (Evie has the Daily Delicious Cafe in town with wonderful quiche, fresh sushi and sandwiches), Pam (Budget Marine), Jeynaba (when we first met, she had worked on painting the Old Fishing Boats for the 50th Regatta with Yopi).  Angie still forgets Kanti Awa’s owners name…Will have to work on that. It starts with a G, and she always wants to call him “Garcon,” which is wrong.(Need to work on those memory skills…..) Hanging out with this group of friends is what made us want to learn Papiamento and to find out more about the Dutch history of Indonesia. 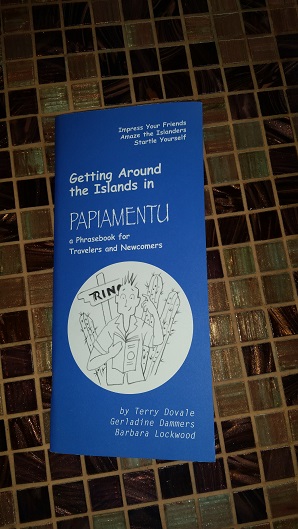 We found that you can have food delivered for $3.50 from downtown to this bar just across from our mooring site.  We ordered two pizzas from Rumba, and they were delicious.  Actually, the best pizza we have had since St Augustine’s Carmelo’s>   Although, for some reason, anchovies showed up on them (Andy Keenan would be pleased!) 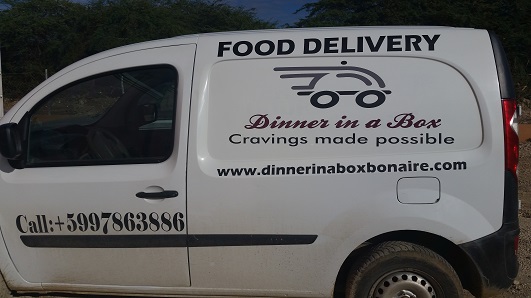 The delivery company was taking Friday off, so Mark hopped in the dinghy and became a pizza delivery driver, once again, just like the good old summertime college part-time job days, after working all day at GE. 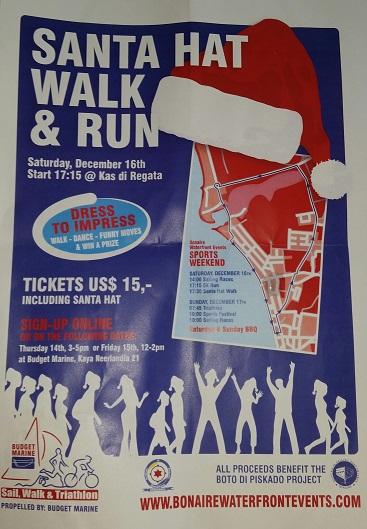 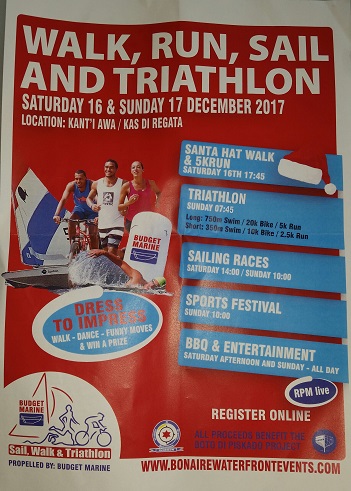 Saturday evening, we signed up to do a 5k walk/run.  We were surprised at the amount of cruisers that showed up for support.  It was fun walking and talking with everyone (Mostly Artie !)

Angie thought the route was going to be much shorter than it turned out to be, but all was good.  Most of the cruisers headed to town for dinner.  We stayed at Canti Awa with Matthew, enjoying a beer.  Rob and Kate on Addagio  showed up as well and we enjoyed the rest of the evening talking smack and testing out Matthew’s bug spray (Au natural, made on Bonaire with Neem oil and Lemongrass.)

Sunday morning came EARLY on Uno Mas.  We volunteered to help Pam from Budget Marine with the Triathlon.   We were a motorized chase boat for the short leg of the swim event and also a corner flagger for the run and bicycle short and long routes.  We were supposed to keep count of how many times the participants went by and then direct them to the finish line on their last pass.  However, when a group of athletes would go by at the same time, and not have their numbers all displayed in the same area, Angie could not catch them all.  All of a sudden, the anxiety started rising.  It was reminding her of timing for the Vipers. MUST-CATCH-EVERY -SINGLE-ONE. 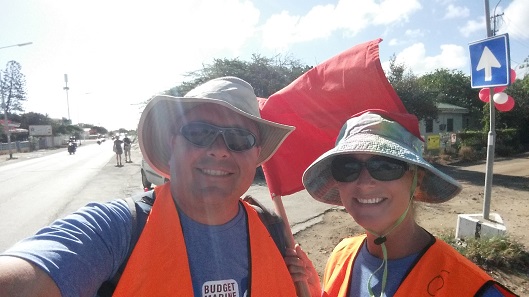 We were supposed to keep traffic from going down the street the participants were using and stop traffic  for them to cross the main road, if needed. Most people were friendly and just motored on to the next turn off.  However, we had a few people get rather irate and blasted through anyways.  We do not know enough Papiamento to understand exactly what they were yelling, but the hand gestures and escalation of voice gave us a pretty good idea. Thankfully, no one got ran over or hit by a car. (That we know of)

The fishing boats came out to race again for the Regatta!  This time, the crew on Arantsa is Mike and Carlos – New Bonairians we met Friday night at Canti Awa. 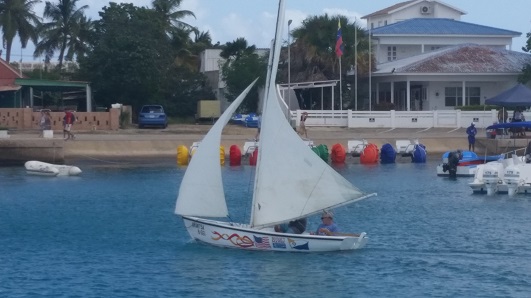 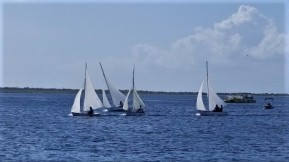 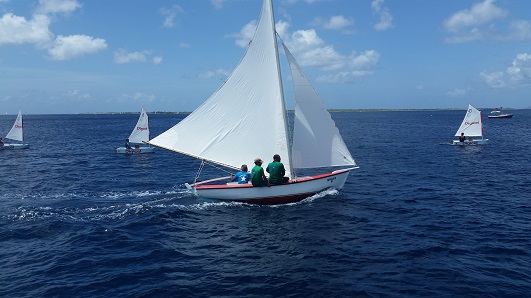